Showing posts from September, 2016
Show All

The strange life of Pi

September 26, 2016
First of all... the ones who understand the title of this post are spread over quite a nice part of Europe... and one is on a different plane of existence (if ever).
Then... life is strange.
When everything goes on on it's tracks, you are prepared to renovate everything in your life (exaggeration, right there...) and even start being blonde, some words on a monitor start becoming more and more important. And hearing a voice is nice and sweet.
And well... hearing that voice it's not easy, it's somewhere far far away. But hey, easy things? Naaa... too boring.
Who knows what's happening? And who cares? What can happen and what will happen are two different things, but both are exciting and there's no use in trying to worry about that. Yep... ZEN mode is on.
Post a comment
Read more

Running life: 11 a side football match

September 20, 2016
And so it happened. After having jogged on Wednesday, a colleague of mine asked me if on Saturday I would join on a match of his 11 a side football team. He would be injured, but would be there.
So I said yes, because: why not?
Probably it's a bit early, I have been jogging (I really can't say "training") for just 3 weeks... but he asked me on Friday, just before I was supposed to go running, and that was a big push on say "yes". I would have not gone running right away, but I would have anyway "jogged" on Saturday.
And Saturday it come. I went to the field, met the team, I was to sub, obviously, and had no problem on that... even better, should I say, because an 11 a side is a big pitch and it's 90 mins and I am old. So... I warm up a bit, exchanged passes with the guys and then stayed on the side watching the match for the first half.
The 2 teams were quite balanced, our opponents were playing with a big fat guy who couldn't run, but lu…
Post a comment
Read more

September 16, 2016
Time is running out. ETA is nearing and getting pretty close: TOMORROW!

Renovations are gonna start. Everything is a surprise and I'm up to do none of the things I should do... at least until I will not start doing them!

Little calendar down here. Cross fingers and whatever else you could cross!

It took quite some years and some months and finally it landed: I've lost.

You know, one of those losses were you can't say: "well, but at least we played well", or "the refs were totally biased!". No... I had all of the opportunities to play well, to talk with the referee (even if, as usual, the referee wasn't interested... happens a lot to me...), to change the game... but I didn't play well. And for once... sadly, I didn't even played fairly. I know, I know... I always prided myself for my fairness. I wasn't fair. My own standards of fairness were not followed by myself. Shame on me. Deserved the defeat and shut the fuck up, because you are an idiot.
So... I lost. I lost and it hurts a lot and it will not go away. Not because never again I will win, or that nothing else matters, because that's not true. Things that matters are all around and sometimes are found in strange places. And maybe I found some jus…
Post a comment
Read more

September 13, 2016
End of second week of this new life of mine. Actually... how to say this... I run only once last week. And I noticed it. Yesterday's match was a slow start. My legs didn't want to start running. And I understand them. Last time I moved them was Wednesday, 5 days before. It wasn't a clever move. But by the halftime they got used to moving and I got better.
I didn't forced any run, but I also noticed (again) that my stamina was better than usual. So... run helped still.
Today second match of the week, and I already knew that I was feeling better from the moment I pick up the bike to ride to the pitch. And during the match it was confirmed. Runs and stamina. Loved it. So, tomorrow is running day, and hopefully also 1 between Friday and Saturday. I should try at least 2 times a week.
Let's see... let's see... I feel that a lot of young player will feel the burn of the old guy...
Post a comment
Read more 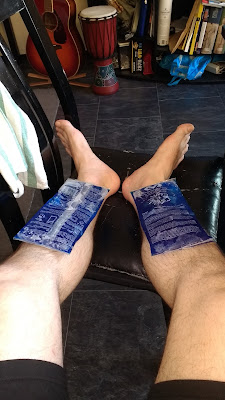 Wednesday come and I went to run. I almost didn't, then I got home, simply changed and went.
The good feeling continued. I had mainly pain in calves and shins... that, as we know by now, is the thing that worries me.
Anyway. I run, stopped just 3 times (2 at the traffic light, going and coming back, 1 for stretching).
It was way easier that the first 2 times, I even thought I managed to increase the time a lot. I wasn't right... basically the same exact time, maybe some minute by km less. But I was disappointed when I saw it.
And at the end, the usual nice relaxing feeling as shown in the picture below:

But... I feel better... the sad thing is that today I will not go. I am already sit down at my desk and giving no shits... sad me...
Post a comment
Read more

Obviously I can not yet know if something really changed thanks to the 3 days in which I run/biked.

What happened, anyway, was that I managed to run way better then usual. Both Monday and Tuesday.
My legs were not stiff from the onset (I have to say that I didn't warm up at all... still not the right moment to get back to that). My stamina was quite well, I didn't have to get sub because I was almost on the verge of death. I was tired at the end, but without any major pain (only the usual ones... I know those ones).

Today second match, and I was way better then usual. Again I am not sure if it's because I moved 3 days instead of sitting down as an asshole. I run, I dribbled, I missed opportunities (but I build them up myself... it was sometimes without something like that).

So, bottom line, tomorrow I was supposed to go to drink beers with my colleagues, but instead I'll come back home right away, go tu run and the go dri…
Post a comment
Read more

September 03, 2016
As predicted yesterday (did I really predicted it? Don't remember... I said I'd maybe do it...) today it was bike day.
It took a lot of time and will to do it. I almost come to simply sat all day and f*ck it. Instead I woke up, ate some cereals (that's the less probable think of the whole day, by the way) and started off.
Ruigoord Route, 18 km, it's my choice. I took the south branch first, to pass through nice woods and the Amsterdamse Golf Club (yeah... because I long for golf...)... and arrived midway (next to Ruigoord village) I decided to go on a bit more. I added 4 km going and 4 back... then I got back by the same route (the south branch...) because I didn't want to ride in the less nice area.
So it was more or less 12/13 km going and the same coming back. 25 km is not much... but it was enough to spin the legs for some time and enjoy the ride.
How much did it take I really don't know. I left after 11:30, but I don't know what time. And come back ar…
Post a comment
Read more

Running life... not so much: missed Day 3 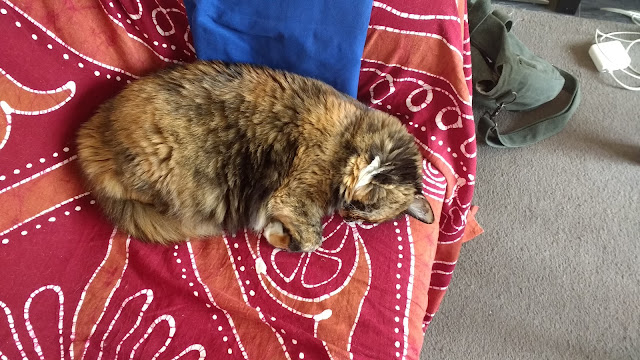 So.
Sitting comfortably on a chair, watching Megam... ehm... STRING THEORY VIDEOS!!
I was saying: today I skipped running... I am sorry about myself. Am I? Well... no, I am not. Anyway. I had to stay at work a bit late, caught traffic, arrived later at home, had to do some chores, rode 500 metres (FIVE HUNDRED!!!) more than usual to get some bread (yes... I do eat sometimes).
Adding all of that to: inflamed left ankle, painful left and right knees at any bent and bad back... and well, let's add too the fact that I really really REALLY hate running and you got me avoiding running today. And I loved it!
Anyway... actually I cleaned my apartment (even if Hour X is in -14 days). I thought I'd also do some stretching... but none until now...
Tomorrow I'll hopefully do a tour with the bike... at least 20 km? Maybe a bit more, just to move but not overwork my poor old joints.
But since I feel sorry for all of you that believed in me: kitty! 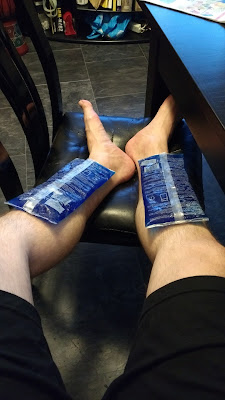 So: day 2 is done!
Same route as yesterday, 1 stop less! Yeah... Basically same time (a bit less, but nothing conspicuous).
Stops:
at 680 metres due to traffic lightat 1400 metres due to back painsat 2200 metres because I was halfway and it was time to stretchat 3720 due to traffic light What I've got: back pains until stretching. Time to stretch before starting, right?huuuge pain in lower legs, shins/triceps... this needs to go away Tomorrow? Who knows...
Pain is quite steady throughout my whole body, the really bad one is at the lower legs and that's the one that bothers me. Mainly because I don't know where it comes from. Then there is left ankle, left knee, right knee, lower back. And that's it... not bad, though.